If you’ve been following the Formula 1 this season you may have spotted three times LeMans winner and now BBC F1 Analyst Allan McNish sporting our 1 Like No Other shirts.

During the Austrian Grand Prix Nico Roseberg beat Mercedes team mate Lewis Hamilton to win. Of course, Allan was there along with David Coulthard and Suzi Perry to offer his expert analysis.

The British Grand Prix saw Lewis Hamilton take a well deserved win after a bad start from the line.

The race from Hungary saw Sebastian Vettel take a surprise win in a dazzling finish.

Hungarian GP: Allan in our Kirby Shirt with Lee McKenzie.

At the Belgian Grand Prix we saw Lewis Hamilton beat fellow team-mate Nico Roseberg for his sixth win of the season so far.

Belgian GP: Allan sporting our Linnaeus Shirt  in front of the camera.

Lewis Hamilton won his seventh win of the season at the Italian Grand Prix. 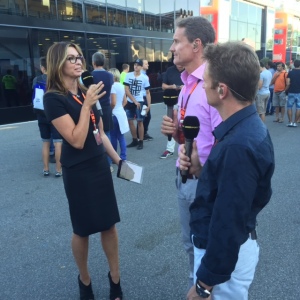 Lewis Hamilton has since won the Japan Grand Prix equaling the legendary Ayrton Senna with 41 race wins. We look forward to seeing Allan offer his own expert insights into the rest of this thrilling season.